2 April: officially registered at the Urbans’ address in Blaricum.

4 April: informs the Massés about his short stay in Paris with the Urbans and Anton Zelling; plans a trip to Fresselines and Crozant, Creuse, and asks his friend to help him organise it.1

16 April: back to Paris with Dutch friends.2

17 April: musical evening at the Massés; Rollinat, César Franck and Debussy on the programme.3

April: travels in the Berry region (fig. 1), visiting the house of Rollinat, a lot of admiration for wild nature.4

Summer: meets through Ernst Pfeiffer Theodore Pitcairn (fig. 2), a wealthy American collector who became his patron, at the Urbans in Laren. Pitcairn buys two paintings from him, including a portrait of Marijke Urban, eldest daughter of Nicolas and Berendina, whom Theodore would marry in 1926.5

Spring – summer: stays in Recloses (fig. 3); the Urbans buy a house rue Sainte-Anne; a studio will be set up there; hopes that René Massé will visit because his fragile health does not allow him to go to Paris; works a lot;1 among his latest paintings, a big bouquet of wild flowers, about which he later talks again to Massé: “I have made a very big bouquet of wild flowers” (unidentified work).2

27 July: invites Massé to have tea in Recloses before his depature to Holland.3

16 December – 7 January 1923: takes part in an exhibition at the Hôtel Corvin, Hilversum.4

Spring – summer: stays in Recloses, strolls around Barbizon and Larchant where he “is thinking of doing a painting “1 but abandons the project “because here in Larchant [he] cannot do anything because of the scorching sun.“2

23 July: letter to Theodore Pitcairn:3 thanking him for his invitation to visit him in South Africa. Smit expresses the hope that the more Pitcairn will know him, the more he will know that his art is for him, not only a pictorial expression, but a commitment that must grasp the soul that God has put into nature and beings, and that through the painting the artist manifests the divine harmony between dream and reality, heaven and earth, nature and the angels; Smit declines the invitation by reason of his poor health, ill-suited to “uprooting”; he can only find balance in his studio, the Recloses region being for his paintings the constant base for his dreamy landscapes; his hypersensitive nature which may seem ridiculous to some, which in fact nourishes his art; has worked a lot in the winter, does not cope well with the summer heat, a period of inspiration made possible thanks to Pitcairn’s goodness; would like Pitcairn to visit him, which would allow him to understand his paintings and the fight of the artist for art, the dramatic, melancholy and the ecstasy proper to all works. He talks about a big painting of wild flowers (very probably [PS 241]) and a study of a wild part of the forest (unidentified work). As for the paintings bought by Pitcairn, he asks him to be patient as he can varnish both paintings (unidentified works) only twelve months after having finished them.

20-26 October: exhibits at Fetter’s in Amsterdam five paintings,5 last purchase of Theodore Pitcairn, before they are sent to the United States.

In spring: leaves on a three-month trip to the United States with Berendina Urban and her two daughters, Marijke and Lotty, accompanied by Ernst Pfeiffer.1 They are welcomed at Pitcairn’s house; at the request of his host, Smit paints portraits of bishops of a Swdenborgian church established by Pitcairn’s father, the “General Church of the New Jérusalem”.2 (fig. 6)

28 June: back to Cherbourg with Theodore Pitcairn, where Nicolaas Urban is waiting for them; they travel on to Chartres.3

30 September: sends a postcard from around Zwolle to Massé; has done portraits, is pleased with the extension of his studio in Sparren and makes plans to leave for France in November.4

Beginning of November: stays in Recloses with the Urbans and Anton Zelling.5

November: In addition to critiques in newspapers, Kasper Niehaus publishes, after the article in Het Getij,6 a second important article in Maandblad7 about Philippe Smit. (fig. 8)

End of the year: Smit stays in Holland.

13 January: informs the Massés about his future stay in Recloses, where the Urbans rent a small house in the spring; he cannot wait to go “to make studies of the forest for painting projects, which he cares about“; does not work very much; sends his friend the article from the Maandblad; is disappointed that the edition is not dedicated to him and by the photos in black and white: “Colour plays a great part […] and has an expression that a photo can never reproduce, a lot of painters for whom the line is sufficient; with me, everything is lost or accentuated according to the work, sometimes the line renders the expression, sometimes it’s the colour. That’s why it is very hard to judge my paintings by photos.“1

13 March: has been in Recloses for eight days; he asks Massé to buy supplies for his pastels at Henri Roché’s, Maison du pastel.2

18 March: asks Massé to buy art materials, this time at Sennelier’s, quai Voltaire, and to empty his small room rue de la Pépinière because he will give notice.3

30 March: moves with the Urbans to another house in Recloses.5

August: is in Laren.

5 January: becomes a member of the “General Church of the New Jerusalem”, the baptism is performed by Ernst Pfeiffer. The Urbans and Anton Zelling join the Swedenborgian Church at the same time.1

12 January: informes the Masses with sadness and happiness of the forthcoming marriage of Marijke Urban to Theodore Pitcairn: “On the 26th of this month, Marijke will marry the young American whom she has loved for several years […] it is a man full of intelligence and with a sublime heart, it is also a great joy that all my paintings will stay in the family as he possesses 25 paintings from me at least.“2

26 January: Pitcairn and Marijke Urban’s wedding; Smit is witness for the bride.

4 February: leaves once and for all Holland in order to settle in France.

26 May: purchases the Château de la Motte in Thoury-Ferrottes in Seine-et-Marne,3 where he will live and where a studio will also be built for him. (fig. 9)

Autumn: “It is now a terrible mess here, all of Thoury–Recloses, without managing to get to a result and yet we cannot leave things like this, especially the poor paintings. I have done for your Moeder [mother] a large pastel of the forest, alas and the weather and the coming and going to Thoury don’t allow me, so to speak, to work.“4

September: returns to France to live in Thoury-Ferrottes; his living conditions are now extremely comfortable.2

24 October: “I can never understand artists who do this whilst having fun, for me art is a fight where I leave my skin.“3

29 November: […] Today, Philippe did a drawing of Paatje [father of the artist], so beautiful, an old man who receives drops from the divine source. It is for the second part of the Arcanes [work unidentified]. […]“.4

18 January: Smit writes to Kasper Niehaus: “Dearest friend, please excuse the time of negligence and laziness, but since our departure from Laren it has been nothing but a whirl of coming and going, first a move with all these pastels and then arranging all these things, you have no idea a real nightmare and on top of that a journey to America where we stayed for 8 months – no small thing, so we are absolutely beside ourselves, and to move and travel is always for me to die a little. Because the depth of my being is so home-loving and there is nothing greater for me than a familiar landscape of which we dream in our everyday thoughts, alas I have not worked much. […]“.1

3 March: speaks about his project for an important painting, as yet unidentified, in a letter to the Massés: “[…] and on top of this, the weather upsets me for a month now as I want to make a large painting in the forest and for that it must be overcast and foggy, so I am impatiently waiting for the weather to change, it will be I think near Belle Croix or near Croix de Souvray. Oh, oh, this magic forest that I love so much […]“.2

March: thanks Theodore and Marijke Pitcairn for the studio he will have soon; he is making a portrait of Berendina [PS 298] for Lotty’s birthday (31 March) but complains about the light; has a lot of plans but has to wait for the studio to be finished; for him, art is “a feeling of a few reflections of the sky and when [he] go[es] for a walk in the divine nature, this combining with art gives [him] an emotion and a feeling as if [he] had wings sometimes. In truth, nature only makes the innocent and the wise happy.“; Jan Zondag stops over in Thoury-Ferrottes and Smit shares with him good memories of Sparren, which make him feel nostalgic of that time: “one must not live in the past too much and yet my soul is forever devoured by it “.3

22 May: Smit is troubled by domestic problems, apart from a big pastel [PS 303], he does not work much, has “many thoughts but […] with limited results “; he is always haunted by the idea “of knowing how to create emotions that one receives from nature [as] here lies the secret of the artist’s soul to give it a shape.”5

Autumn: stays in Bryn Athyn (Pennsylvania) a few months at the Pitcairns; he becomes very nostalgic for Thoury, and cannot wait to be in his new studio in order to make great works again.7 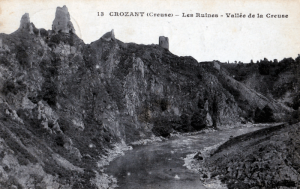 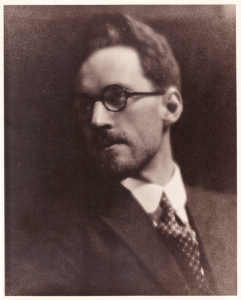 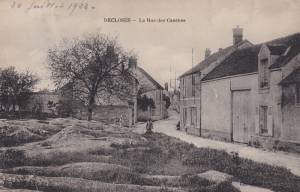 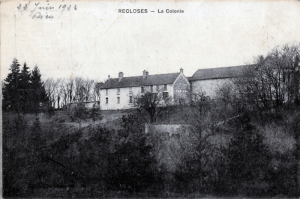 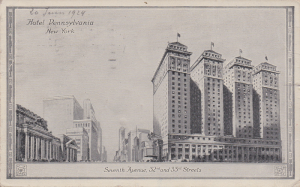 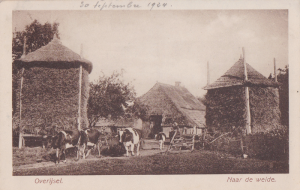 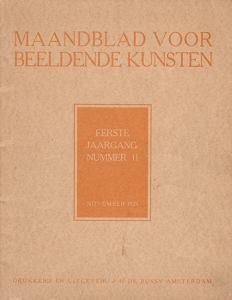 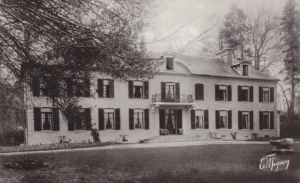 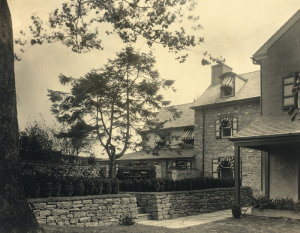 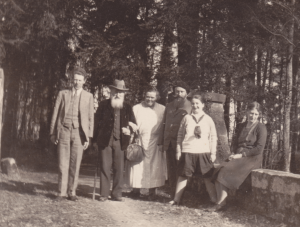