He was a cultivated man, who knew Latin, Greek and Hebrew and spoke several languages; he was also a talented pianist and passionate about theology. After publishing a book on Claude Debussy in 1918, he became known from 1925 for translating several works by Swedenborg from Latin to Dutch and publishing, between 1930 and 1938 in the magazine De Hemelsche Leer, numerous articles analysing Swedenborg’s writings.

A polyglot and lover of French culture, he translated into Dutch the poems of Mallarmé. Like Philippe Smit, he was interested in the poetic and musical work of Maurice Rollinat, to whom he devoted a study in 1958 in Bulletin des Amis de Maurice Rollinat1.

His Swedenborgian beliefs led him in 1937 to join with Theodore Pitcairn in the creation of the Lord’s New Church and then to establish its international structure in 1947. He remained an honorary member of the “Swedenborg Society” in The Hague until his death in 1948.

The date of his first meeting with Philippe Smit remains uncertain, but in a long article he praised the first exhibition of the painter organized in April 1916 in Amsterdam.2

The two men shared a deep friendship that ended only with the artist’s death in 1948. During their many meetings, Zelling played the piano and they talked about art, poetry and religion.3

At the beginning of the 1920s, Smit made a pastel painting – whose existence is only established from an old photograph – showing his friend at the piano. For reasons unknown, the painting was cut and only a part remains, showing the face and upper body.4

Linked by the same love of music, the writings of Mallarmé and Rollinat and the same Swedenborgian beliefs, their friendship was an enduring one. 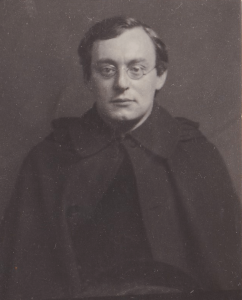 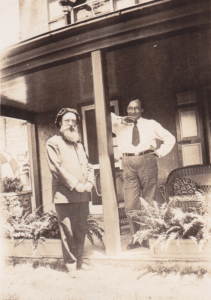 Philippe Smit and Anton Zelling on the veranda at Dientjehaeme, Bryn Athyn, 1920’s.