17 November: born in Zwolle, Netherlands (fig. 1), Philippus Jacobus Johannes Smit was the son of Jacobus Smit and Marie Clotilde Eleonore, née Courdy, of French origin (fig. 2). He was the youngest of five children of the couple to survive; his sisters were Elizabeth, nicknamed Lize or Lisa (*1874), Leonore (*1875), Clotilde (*1877) and Emma (*1885) (fig. 3). One brother, who was born in 1880 and died in 1883, had the same name as him. A second brother, Johannes (*1882), and a sister Jacoba (*1892), died shortly after their birth. Some official documents including his last passport and death certificate, erroneously record that he was born in 1887.

July: the Smit family arrives in Paris and resides at 16, rue Caffarelli in the 3e arrondissement.1

Philippe benefits from a French education, his father works as a hairdresser.

20 November: Smit is discharged from the Dutch army.1

As a young man, he earns a living by drawing and making jewellery (see [PS 6]).2

1. Official document of the Dutch military authority. 2. Philippe Smit always believed that he became bold at an early age because of this activity as a jewler who worked under a very strong light (anecdote told by Miriam Pitcairn): see “Unpublished interview of Miriam Pitcairn-Mitchell” by Jonathan D. Kline, Bryn Athyn, 7 March 1994, 16 typewritten pages, p. 8, Glencairn archives).

Sometime within this period falls his encounter with the couple Nicolaas and Berendina Urban who provide both financial and moral support. Nicolaas also assumes the responsibility of selling Smit’s works in the Netherlands.1

2. Except from Miriam Pitcairn-Mitchell’s unpublished interview with her son Lorenzo Mitchell (taped between 1992-2002 and transcribed at a later date, p. 19, private archives, Paris) we do not have any other information about the date when they first met. On 19 May 1905 the Urbans leave Amsterdam for Bussum (Huizerweg puis Ruthardlaan) where they live until 1912.

Meets Ernst Pfeiffer, a friend of the Urbans, around this time.1

Attends in Paris two drawing schools: the “Académie” in rue Etienne Marcel and the school of Adolphe Gery-Bichard, engraver-painter, in rue Montgolfier. Here he meets René Massé who becomes a life-long friend. Although the exact dates on which Smit attended the schools are unknown, his correspondence with Massé begins in 1910 which suggests that Smit started school about the same time.1 Smit leaves the paternal home to live in a small room rue Malte Brun in the 20e arrondissement, at the same address as René Massé.

June – September: travels to Holland but returns to Paris in July because of his mother’s death.2

1. Massé named the schools in his diary: “He spoke of our dear Comrade Beauvisage, who had a fine talent as a painter, and whom we knew at the Academy rue Etienne Marcel before the war of 1914-1918. I handed over to Philippe the photograph of Géry-Richard, Peintre-Graveur, who was our teacher at the evening drawing lessons in rue Montgolfier.” (Massé 1920-1935, p. [1]). 2. See Massé album, p. [2-4].

Several visits to Holland until the war.

7 September: arrives in Vétheuil; he sends a postcard to the Massés and tells the story of his visit to Monet’s studio in Giverny: “[…] Here I am, arrived in Vétheuil, it’s superb. Would you believe that last Sunday I went to Giverny. That is in the Eure. It is a superb region. I prowled around Claude Monet’s house. A garden with flowers of all colourations, and while walking behind the house, there was a door open. I noticed a young man who was about to put away his car. I had the nerve to ask if I could see his studio. I got permission and what a good man. I was not disillusioned. […]“.1 (fig. 4)

Early October: undertakes again walking tours along the banks of the Seine and its surrounding areas in Mantes, Bonnières and Vétheuil. He makes studies there.2

A time of extreme destitution for the artist.

Winter/spring (?): visits Barbizon and talks for the first time about “this pretty and big forest of Fontainbleau” where he produces “a few studies” and notes “delightful reminders of Millet“.1

3 January: sends his friends René and Mathilde Massé his “best wishes for the year from Recloses, a small village at the edge of the forest of Fontainebleau”.2 In 1922 the Urbans will buy a house there, where the artist will regularly go for long stays.3

2 October: Smit’s father writes to Massé, asking him to carefully inform his son about the death of his sister Clotilde.6

18 October: strolls “in the countryside, at the edge of the forest of Rambouillet […] it had been a while since [he] had seen this beautiful nature.“7

November/December: Smit is in Osny and Auvers-sur-Oise: “Me I am painting a street in Auvers, it is a nice place. It has fine tones.“8 (fig. 5)

Early January: Smit is in Osny1; walking tours in Auvers-sur-Oise and its surrounding areas.2

10 January: sends a postcard from Auvers-sur-Oise to his father: “I have started a good study that contains some interesting efforts  […]”.3

August – October: spends several months in Holland staying with the Urbans in Hilversum4: he travels to Amsterdam where he enjoys the city’s cultural life; goes on short trips to the Zuiderzee region; staying in Naarden with peasants he is very upset about the bad weather which prevents him from making progress in his work but is in love with this beautiful and wild nature there; in Zwolle he evokes his childhood.

29 août: writes to the Massés: “[…] these days I have seen a marvellous exhibition of Vincent van Gogh. There were all his periods, his Dutch style and then Monet’s influence and a strong manner of feeling similar to that of the Japanese. And beautiful pen drawings. There were more than a hundred of his works. Have never seen an exposition so complete of an artist. And also very beautiful works of this fine Dutch painter Van Daaloff,  they are little masterpieces, as for me, I am crazy about them […]“.5 He does not stop there and he meets the artist at his home and considers that he is “in Millet’s line“.6

10 September: writes to the Massés: “I have taken a walk on the banks of the Zuiderzee, it is very beautiful. You have no idea, my dear Rene, how grand and melancholy it is, for I do not know if it is the climate but I feel very melancholic in Holland […] I painted a few flowers because the weather is not yet suitable for painting. I made a pastel with marshes [work not identified] because the marshes in Holland are very beautiful“.7

6 October: “[…] I am writing to you from Zwolle at the moment, what a pleasure to see again all the memories of childhood, these regions have barely changed […]“.8 (fig. 6)

Autumn: goes for walks in the forrest of Fontainebleau and in Barbizon.

End of the year: returns to Paris. 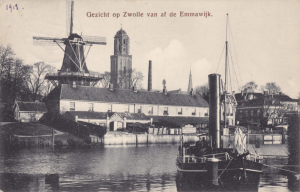 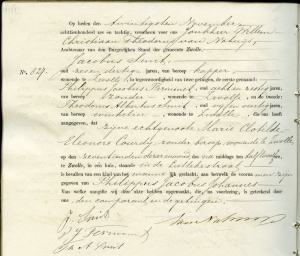 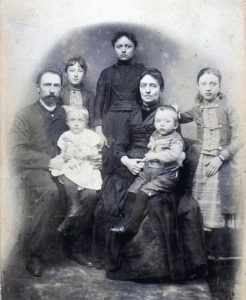 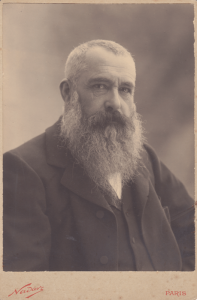 FIG. 5 Sketch of the street  appearing at the end of his letter. 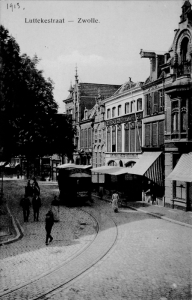