22 May: following the Nazi occupation, Leo Hubscher insists that Berendina and Smit leave Thoury-Ferrottes and tries to register the châteaux of Pleignes (fig. 1) and La Motte with the American Legation as American property.1

End of May – June: Exodus, Smit settles with Berendina and her daughter Lotty in Pau where he lives until 1943.2

28 August: informs Marijke and Theodore Pitcairn about the chaotic situation in Pau due to numerous refugees, their lack of money and of possibilities of finding a suitable home; it is impossible for him to work, having left his material in Thoury; mentions the death of his father.3

16 October: marries Berendina Hubscher, formerly Urban, at Pau city hall.4 This marriage does not affect in any way the friendly relations with Nicolaas Urban and his new family.

2 December: is happy to have the consent of Marijke and Theodore Pitcairn to his marriage with Berendina; thanks Theodore for sending colours and paintbrushes of different sizes made of sable whose arrival is difficult to predict, “impossible to work“.5

23 April: “ Philippe, of course, suffers most from his forced absence from home and from hotel life; also because it is so difficult for him to get the necessary material to work;”1

During the year: “[…] Often my dreams float above the Barbizon in the old days, Arbonne, Recloses, our dear forest, all this has roots so deep in me that it has become a way of breathing […]“.2

December: “[…] Especially here we lack the delightful nature which is always of great consolation, I am nostalgic for a corner of forest, our dear forest of Recloses, all its places whispering the reverie of my work. I sometimes feel on another planet, it’s strange   […]”.3

January: still nostalgic for the old days and the surroundings of Recloses, is very disturbed by the misfortunes and sorrows engendered by the war “[…] work a little with great difficulty as always but at this moment even more because this atmosphere is not there to bring forth those subtle things that the real artist carries in him, finally a lot of courage, because it is necessary in these times to defend an ideal among all the ruins that are around oneself […]“.1

July – August: obtains a safe-conduct (fig. 2) authorizing him to go to Bagnères-de-Bigorre from 8 July to 26 August in order to get medical care. He does not like the place. “[…] Here nothing to find, a small bourgeois town with no atmosphere, very few old things, I look forward to seeing nature, the great skies, the valleys, all the poetry of the Seine-et-Marne and even of the Creuse and Brenne, my temperament not being for the great mountains, especially the foregrounds do not match with the background, besides I preferred the Provence a thousand times more. Nothing pleases me here, the color is bland, no! It is not a region for painters, […]“2

26 September: talks about his project of a “ballade in the rainbow or angel concert“.3

27 January: “I often think about the beautiful words of Millet, art is a battle, where one must leave his skin.” writes Smit to Roger Capard1 when he describes to him his new work Spleen of Paris [PS 504].2

28 March: hopes to be able to get back quickly thanks to the help of Roger Capard.

22 June: is authorised by the prefect of the Low-Pyrénées to return to his residence in Thoury-Ferrottes. (fig. 3)

September: returns to Thoury-Ferrottes, suffers from the heat, does not like to work during heatwaves “[…] nothing is pretty in this weather [and yet] the month of September can sometimes have an atmosphere so diaphanous, all impregnated by a Mallarmé-like poetry […]“.3

19 November: gets back in touch with Henri Roché to order “pastelalo[s]” because these, unlike pastels, are irrecoverable after so many years of abandonment. 4

1 December: wishes Roché a prompt recovery from his pains and hopes that he will be able to find a fixative for his pastels and a product against moisture spots which are affecting his works. His “poor pastels have suffered terribly, [he is] currently touching them up and alas they are losing a lot of their primary values.”5

29 October: leaves with Berendina on a long trip to the United States via Spain, Portugal and Porto Rico (24 November).

Accompanied by Berendina, stays with Theodore and Marijke Pitcairn at Dientjehaeme, the family home of the Pitcairns. (fig. 4)

27 January: informs Roger and Raymonde Capard of his satisfaction to be in America, even if the atmosphere is not comparable to that of France; thrilled to find at the Metropolitain Museum in New York all the painters he loves, this city has a lot of character; greatly appreciates the enormous contribution of America to help Europe after the war; leaves for Florida to flee the cold. “Up until now I have not worked. I have great difficulties to find my balance; one does not displace a plant as fragile as the soul of an artist.“1

31 January: the lorry transporting Smit’s works for the exhibition at Maurs in Paris has an accident at Plessis-Chenet.1

4 February: inauguration of the exhibition at the gallery Pierre Maurs.2 (fig. 5)

5 July: death of Smit in Thoury-Ferrottes, where he is buried in the town’s cemetery. 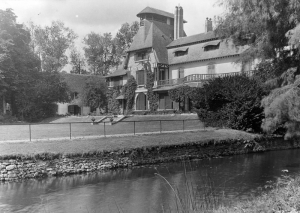 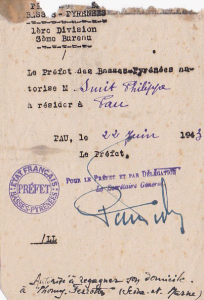 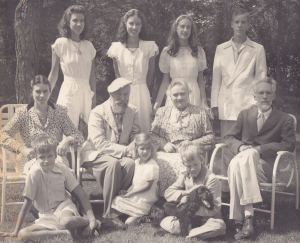 FIG. 4 Philippe Smit and Berendina  surrounded by Theodore and  Marijke Pitcairn and their children, USA, 1945/46, courtesy of Mrs. Eshowe Pitcairn-Pennink. 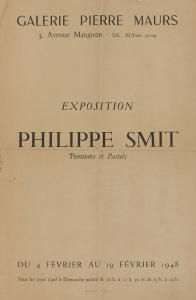