12 February: “What a joy to see again beautiful France, what poetry. It is a mystery one cannot explain. […] The studio is not what I would have wanted, when one is not around, they do an awful lot of things that one would like done differently, but well it will be for the paintings to give the studio its soul. […]“.1

18 March: has “ not done anything yet [as many] things in the studio are not finished before finding the harmony and the atmosphere that he had in Sparren.” Anton Zelling is with Philippe and Berendina.2

July: the Urbans’ divorce is decreed; Smit lives with Berendina.

Berendina Hubscher-Urban purchases the adjacent house on rue Sainte-Reine, Recloses, in the name of her daughter Lotty; a new studio is set up for Smit.3

Autumn: takes possession of his studio in Thoury-Ferrottes. (fig. 1)

10 November: René Massé writes that: “[…] Arrival at Château de La Motte. […] We go to Philippe’s new studio. On the outside looking like a chapel, an old wooden front door, a very small vestibule where we leave our coats. Then the big surprise of the studio: huge room, large bay window with two very large crimson velvet curtains – the polished oak panelled ceiling – the squared beams of the 2nd room, the fireplace with columns surmounted by Romanesque capitals. The third room with tiny Dutch windows, the remarkable small Tanagra, the head of a woman (Greek art), the wooden statue of a saint of the 9th century, we feel the arrival of Romanesque art, a very beautiful female bust. […]“4; the same day Massé has also seen the new studio in Recloses and provides the only known account of this place: “[…] New surprise! We go into the studio, newly converted, where the cattle used to be. Very Dutch studio, a large fireplace with a mantel up to the ceiling. Exposed beams, the gallery hung with beautiful fabrics including a chasuble; the Spanish chest that used to store linen. Many reproductions of the great masters. The small window is a marvel of intimacy in this studio, the sun shines through. The back of the fireplace is covered with blue faience, tiles with subjects.“5

Spring: travels to Spain with Berendina, Lotty and the Pitcairns. “Zuloaga […] had given information. […] [He] has visited the Prado Museum in Madrid, his admiration for the painter Velasquez and especially for the portrait of the ‘Infanta’. Likes Titian. […] Considers that El Greco is the greatest painter of Spain and places him well above Goya. […] Very enthusiastic about Spain and its type of landscape, beautiful skies that El Greco captured so well. […] Toledo has retained its character, but many tourists. […] Loves very much Segovia. […] Returning to France, admires Notre-Dame-la-Grande at Poitiers, the famous stained glass. Bourges and its cathedral, especially inside. Does not like Biarritz or Montauban. The trip to the home of Maurice Rollinat in Fresseline, a garage today! The Creuse is deteriorating.“1

28 August: orders pastels at Roché’s: “I would like you to make a selection of very beautiful pastels […] But please strong shades, not gradient […] the deepest but keeping their most powerful shades and among the light ones also solid ones, because I hate dull shades, well Mr Roché now you are starting to know my tastes a little. […]“2 (fig. 2)

13 December: château de Pleignes: René Massé: “Conversation about art in general. The revelation of the colour by Velazquez at the Prado Museum and his disappointment in Manet as a colourist. His admiration for Millet […]; loves Puvis de Chavanne, does not think he is a great colourist […]. Van Gogh and his colour which stands firm. Claude Monet and his magnificent water lilies, finds that atmosphere had disappeared from some of his paintings. He understands very well that Monet closed his door mercilessly. Finds Sisley admirable, how he has captured the atmosphere of the Loing Valley. Likes very much Chassériau. Great enthusiasm for the last exhibition of the Toulouse-Lautrecs […]. With regard to modern painters, Van Dongen and Dunoyer de Segonzac. Finds that [Georges] Dufrénoy always does the same thing – does not like Forain.”3

30 January: writes to the Massés that he is in Saint-Raphaël in the Var for a few months with Berendina, Lotty and his father.1 (fig. 3 & 4) His stay on the Var coast is prolific.

3 January: informs the Pitcairns about his trip to the South of France: “[…] I hope to be able to work in the South, I am especially happy for our dear father who sees winter like a nightmare, and naturally this Mediterranean country is ideal for him and I must admit for me too, because there is an atmosphere, a colour, which is really an antique vision. […]“1

February – March: is on holiday in the South with his father and Berendina. His stay is momentarily overshadowed by a bout of neuralgia as well as dreadful weather, but he hopes to be able to work a little. Smit expresses his admiration for Puvis de Chavannes, one of whose works has just entered the Louvre, which he hopes to see soon. He complains that the recent Niehaus article focuses more on his biography than on his work. The critic should “be a writer and [have a] well-ordered mind without falling into an excess of imagination or into a cold triteness.“3

29 March: René Massé: “Visit from Philippe Smit, Dien, Léo, Loty, back from the Midi. Philippe is enthusiastic about  the Auvergne (fig. 5) which he crossed.“4

April-May: travels to the United States.

8 April: They leave for America […] via Cherbourg on the Bremen 4 ½ days – are afraid of French ships since the fires. / If it were not for the family, they do not like America, although Theo has a very nice wooded property. / Théo had a large studio built where there are 32 works by Philippe Smit, as well as Rembrandts, Sisley, Monet, Van Gogh, El Greco.5

29 July: informs Henri Roché about his discontent; finds that the cardboards are too soft on which the pastel colours loose their intensity; is very disturbed in his work.6

4 August: answers René Massé, who is in a delicate financial situation, and tells him that he had “tried to work a little. But summer is not the best season for Brittany.“7

September: is in The Hague, still very preoccupied by René Massé’s affairs, but does not offer anything other than courage.8

20 October 1933: explains to René that he and Berendina have difficulties with everyday expenses; is “currently doing a portrait for Dien [Berendina]’s birthday” (unidentified work).9

December – January 1934: exhibits at the gallery Goudstikker in Amsterdam.10

10 March: Smit offers Massé to “pay each trimester [his] rent” and tells him that he is “currently doing a large painting1 in which he in search of all the difficulties of contemporary painting.“2 (voir [P116; LNC191]).

13 March: writes to Theodore and Marijke Pitcairn: “I have deeply appreciated Theo’s letter where he writes about my paintings and also about the smaller paintings, I am very pleased about it, it is a moral support that one so often needs in life, because despite all convictions in Art, there are moments of weaknesses and doubt, especially when one thinks about the Great Masters, but especially for this I am so happy and it gives me the strength to go further, because I deeply appreciate Theo’s judgment, I hope that when you come, I will have a lot of things to show you.“3

19 April: orders several cardboards at Roché’s. “But of very good quality, not like […] last summer, because the cardboards were too soft, […] many of my cardboards […] crack, and I am worried about that in the future “.4

Autumn – winter: is in Thoury-Ferrottes.

From now on he uses a “new technique of pastel in tubes invented by Roché – prepares all the underground with this type of pastel spread with a brush, like oil colour, this dries. When it is not quite dry yet, one can continue with pastel sticks. This way one can obtain brilliant lights, since the pastels are not weakened. Great advantage.“6

Sees again “Picasso in Paris, very kind, has invited him to Thoury but never came.“7

Spends the whole year in Thoury-Ferrottes with round trips to Paris.

29 May: Massé writes: ” Philippe and the Italian Art Exhibition, his admiration for Botticelli – Giotto –Leonardo da Vinci –the sculptor Donatello.“1 & 2

6 September: expirences financial problems due to the drop of the dollar and regrets not being able to help Massé; was ill during the whole summer, he had “strained nerves [..] this is always [his] weak side [his] poor nerves“.3

Smit writes a will in which he bequeathes his paintings to Berendina and if she were to decease before him, Lotty and Marijke would be his beneficiaries.4

Goes on a trip with Berendina and Lotty along the Loire to the Atlantic.

End of September: spends a few days with Berendina in The Hague, meets with Anton Zelling, Ernst Pfeiffer and sees other members of the Swedenborg church, visits his father in Haarlem.1

11 October: writes to the Massés to invite them to stay with him in the countryside and tells them that he had “worked very little lately, morale was not there, to be in the right conditions propitious to art which demands so much all the finest strings from the arc of dream.“1 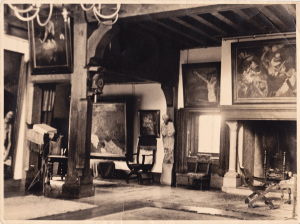 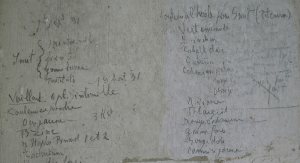 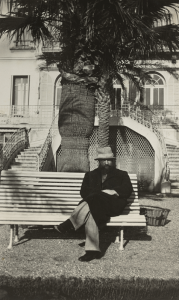 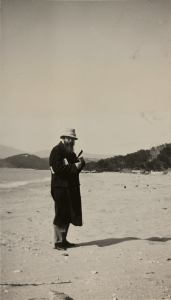 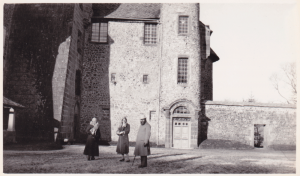 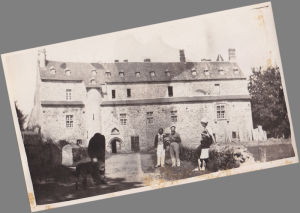