It was most probably at the beginning of the 1930s that he met Theodore Pitcairn and very soon became the manager of his castle Pleignes, in Seine-et-Marne.

During the exodus of 1940, he organized Smit’s move to Pau, together with Berendina, Lotty and all of the artist’s works. Hubscher and his family stayed with Smit there until 1943.

After the sale of Pleignes in the late 1940s, Theodore Pitcairn brought him to the United States, where he became Pitcairn’s secretary and principal collaborator.

From 1949 to 1954 Hubscher became closely involved in a project to publish a book devoted to Smit’s work, a project which was never completed.1 In particular, Hubscher was responsible for the coordination and translation of contributions from different authors thanks to his fluency in three languages (Dutch, English and French).

In 1961, he died in the United States where his daughter Gloria2 inherited his role as Pitcairn’s assistant. 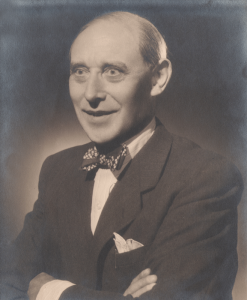