Fourth daughter of Jacobus Smit and his wife Marie-Clotilde Courdy, Emma was born in 1885 in Zwolle, the Netherlands, a year before her brother Philippe.

In 1895, the family settled in Paris, where her mother died in 1910. That same year she left her job at L. Bergeron, a manufactory of bags and decorative boxes for confectioners, where she had been working since 1903. Throughout the First World War she lived in Holland.

A deep affection bound Emma to her brother and, although slightly hunchbacked, she posed for him several times between 1912 and 1918. From these sittings, we know of fourteen portraits, including one in which the artist paints himself together with his sister, his hand on her shoulder [PS 174].

Emma died on 5 November 1918, probably from the Spanish flu. She was represented one last time after her death in Smit’s rendition of the Pietà [PS 189], qualifying her in the annotation on the back of the painting as a “Seraphe [sic] celestial”. 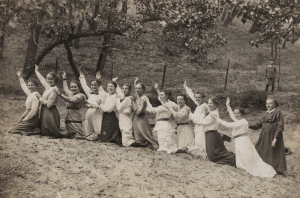 Emma standing to the right possibly with other workers from L. Bergeron, before 1910. 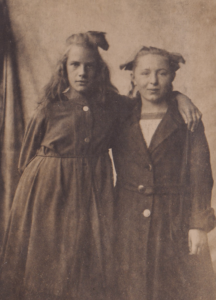