Famous scientist and renowned philosopher, Emanuel Swedenborg had mystical experiences from 1743 onward, during which he claimed to have visited heaven and planets, hell and paradise, where God allowed him to converse with the angels.

In his writings he claimed that they are beings of ineffable beauty, with human appearance and clothing. They possess five senses, understanding and volition, and all things human. Angels, said Swedenborg, are men like men in the world. They live like men through the heart and breath, like them, they feel, think, act and speak.1 In general, he said, everything that appears in heaven is like all that exists in the natural world and its three kingdoms. 2

Likewise Philippe Smit, a convinced Swedenborgian, did not hesitate to represent angels in an earthly setting, devoted to human activities, yet detached from lowly contingencies. In this way, he sought to construct an iconography which reflected his religious commitment. 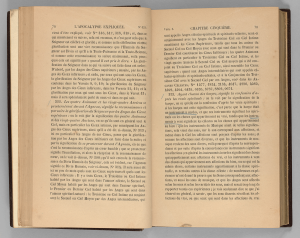 Chapter 323 of “The Apocalypse explained”, which certainly gave the artist the inspiration for  his “Angels’ concerts”, former library Philippe Smit (private archives, France).