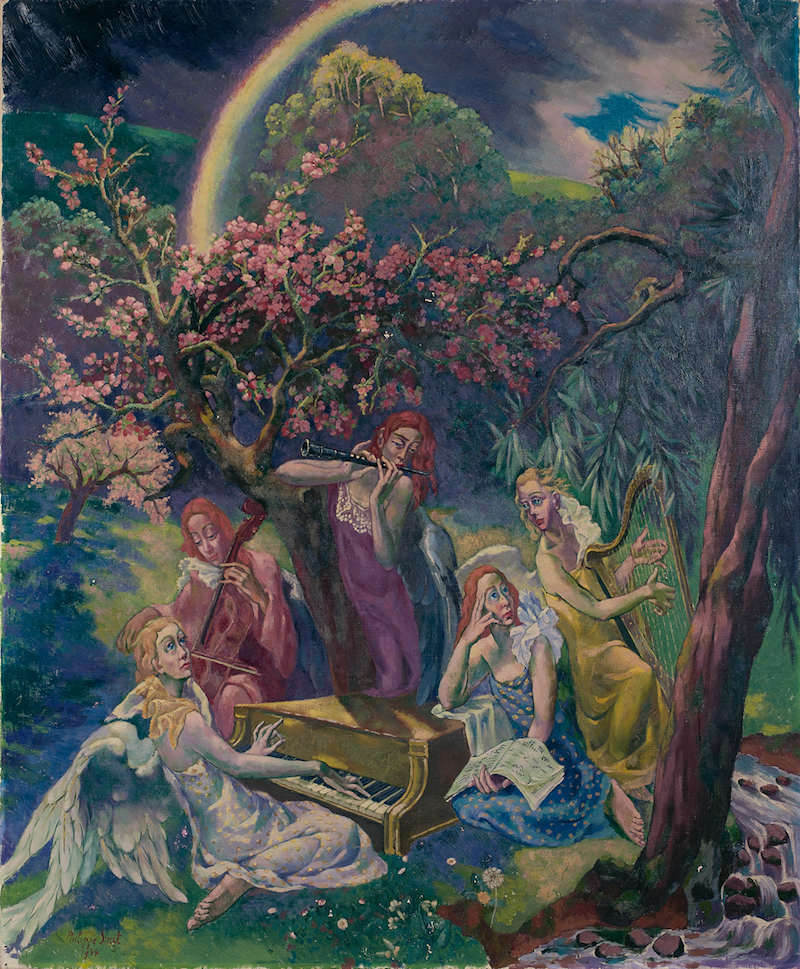 It was most likely due to the unfavourable situation in Pau during the war1 that he was not able to carry out the project straightaway and so its execution had to wait until Smit returned to Thoury-Ferrottes. On the 16th of April 1944 Berendina wrote to friends:"[...]  and Ph[illipe] will finish his  angels' concert."2
Angels (whether alone or in groups) are a recurring theme in the work of Philippe Smit. Often his representations go beyond the conventional framework of Christian iconography and show these celestial beings on earth, even performing common tasks, such as the angel who knits (see [PS 257] and [PS 353]). However, these creations are by no means the pure product of the artist's imagination; on the contrary, they reflect his close familiarity with Swedenborg’s writings.
In several works, Swedenborg recounts his mystical experiences, which led him to visit the angels in heaven, and to discover that they were not created at the beginning of time as professed by the Christian doctrine. For him, heaven is peopled by humans, whose behaviour and faith are rewarded, after their death, by their transformation into angels.
In so doing, they retain their human appearance, but "have more exquisite senses […] a keener sight and hearing […] think more wisely […] for they see in the light of heaven"3 "and the more they live […] the more they march towards a spring full of pleasures and happiness […]."4
At the same time, in their spiritual world, Swedenborg says that there are hills and valleys, palaces and houses as in the natural world and all the things one is accustomed to seeing on earth. "[…] such things and innumerable others still more perfect are presented before their eyes by the Lord; and yet these things are more pleasing to their minds than to their eyes […]"5

Record last updated July 3, 2018. Please note that the information on this and all pages is periodically reviewed and subject to change.
Citation: Narzt, Andreas and Castellani, Florence. "Angels' Concert (five figures), 1944 (PS 512)." The Complete Works of Philippe Smit. http://www.philippesmit.com/cr/catalogue/entry.php?id=512 (accessed on September 26, 2021).