Born in Amsterdam on 26 September 1877, this Dutch art-loving mortgage broker and amateur painter was married to Berendina Hubscher. He met Philippe Smit around 1910, at a time when the painter was leading the life of a struggling young artist in Paris.

Quickly seduced by Smit’s personality and talent, Nicolaas and Berendina Urban provided him with moral and financial support, welcoming him to their successive residences in Bussum, Hilversum, Amsterdam and Blaricum/Laren1, putting a studio at his disposal.

The couple seperated in 1928 and divorced in 1929. Nicolaas Urban remarried Nanette Belinfante that same year.

In love with France and its culture, he settled there permanently in 1928, living first in Samois-sur-Seine then afterwards in Fontainebleau from 1930 until his death in 1962, with a brief spell in Céré-la-Ronde (Ceray) in Indre during the Second World War.

Throughout their lives, Urban and Smit remained the closest of friends. Neither the divorce from Berendina, nor their living together, nor the subsequent marriage of the painter with her, altered this connection. Their friendship was based on a shared love of art, nature and Swedenborgian beliefs. Urban’s friendship and admiration for Smit’s work is best summarised in a letter dated Christmas 1941: “What a joy to have a friend like you“.2

1. The Urbans’ villa “de Sparen”  was located in the village of Blaricum, Achter Torenlaan, just on the border to Laren, the centre of the family’s and Philippe Smit’s social and cultural life. Theodore and Marijke Pitcairn baptized their eldest son Laren in memory of that town. The Urbans left Laren for France in 1926. 2. “Quel bonheur d’avoir un ami comme toi” (voir Urban, Nicolaas 1941, response after having received from Philippe Smit three reproductions of his latest works at Christmas [PS 485], [PS 473] et [PS 486]). 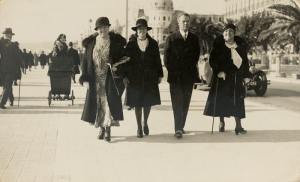 Nicolaas Urban, to his right Nanette and their daughter.